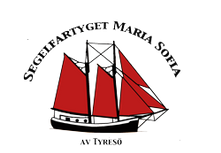 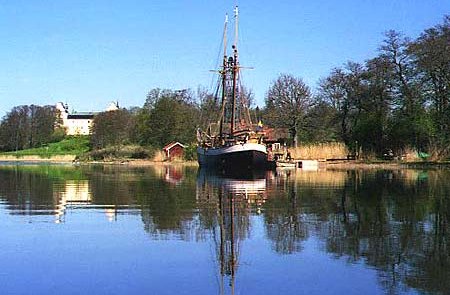 1997: Maria Sofia is rebuilt as a two-masted schooner at the pier at Tyresö Castle outside Stockholm

The ship was built in 1950 in Hälleviksstrand on the west coast of Sweden as a fishing vessels named Meteor which then changed name to Gullskär. She served as a fishing boat from a long line of ports on the east coast of Swden - Dyrön, Klädesholmen, Karlshamn, Hasslö at Karlskrona and Visby.

In 1987 she was badly damaged in a fire and subsequently towed to Tyresö. Between 1989 and 1997 underwent a complete rebuild to a two-masted schooner named Maria Sofia. The project was run by Tyresö Council, it was ongoing all-year-round and employed around 150 people in total.

2010: At the dry-dock in Beckholmen, Stockholm

Newly caulked, freshly painted and with new bords Maria Sofia is awaiting the opening of the dock-cates.

Hectic days in the dry-dock.

During four hectic weeks in August 2010 we worked around the clock on Maria Sofia. She was caulked and new plates were added where needed. Three bords were changed midships and the hull was painted.

Preparations for the Altlantic crossing.

In 2007 we recieved a mail from a man called Ed Davis in California who had come across Maria Sofia in a different lifetime...

"The last time I saw Gullskar was in 1966 in Spain. She was in shambles undergoing refit. We had to scoop lots of loose grain from the hold as the ship had been used to haul grain. My friend purchased the Gullskar in Sweden and had it motored to Spain.

Spanish sailmakers were making new sails for him and as I recall there was lots of other work being done on the ship. My friend was an engineer working with me in the nearby Spanish town of Rota. His home was in the State of Washington in northwest USA. His plans was to sail his ship all the way around to the west coast of the USA with his wife and two small children.

I doubt he made the trip."

We were obviuosly pleased to inform Ed that the ship was now in fine form after her ordeals having been lovingly rebuilt.